November 1, 2018
< Back to News
Categories Member News
View by Date November
Back to previous page

Tony Cann CBE, the founder of Promethean, whose interactive white boards revolutionised classrooms in the nineties has launched a new Classroom App that promises to change schools once again.

The Classroom App ‘Learning by Questions’ (LbQ) has just undergone a year-long £1 million Feedback Project run across the UK. Every teacher who took part in the trial* stated that LbQ had saved them time and 9 out of 10 teachers said that it had helped their pupils to achieve greater academic progress. Find the case study film from Ribblesdale High School here. 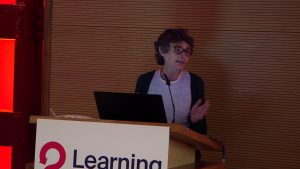 Baroness Estelle Morris of Yardley, former Minister for Education, spoke passionately at the launch about why LbQ is different:

“The literacy and numeracy strategies (employed in the past), were also evidence based and focused on pedagogy and although they had a positive impact on standards, they were enforced from the top. In the long term, teachers need to feel that they are exercising professional judgement whilst still using evidence. That is how you win the hearts and minds of teachers. That’s what is different about LbQ. It’s using the best pedagogical evidence, but it’s not telling teachers how to teach.”

“I have not seen a technological solution for schools that is anywhere near this quality. It does the things that lots of systems promise: differentiated and graduated content, challenge and support, individualised questions to practise, personalised and whole-class feedback in real time, error-diagnosis, and a scythe through all that marking that teachers otherwise have to do.

Schools need to get on board now because the maths content is excellent. (Science and English have since been added). The developers behind this are a proven team and I can’t wait for every update because, mark my words, this is cutting edge curriculum and it is going to be with us for years to come.” 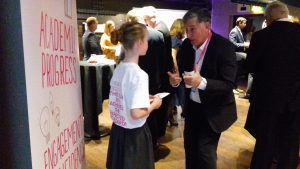 Tony Cann, who was awarded a CBE for his services to education, appealed to the launch audience to tell as many people about LbQ, a large portion of which is a completely free resource for teachers:

“As developers we learned from teachers around the world, we learned from educational researchers and pupils. We have worked diligently and passionately to create a solution that answers the needs of pupils and teachers everywhere. It falls to you to spread the word.

In ten years, we will not be the only ones delivering this pedagogy, but we will have been the first. Years from now you will be able to say that you were there at the beginning.”

*Based on 85 teachers completing the exit survey.

Learning by Questions (LbQ) is a cloud-based educational classroom tool and App that saves teachers time and increases their efficiency by highlighting which students need their help and which concepts need teaching during lessons.

Students’ use devices such as tablets and progress at their own pace and level through high quality Question Sets and receive immediate automatic feedback as they answer. Teachers receive live analysis and results are saved to support assessment and planning. Data is stored automatically to support lesson planning.

LbQ covers KS2 and KS3 maths mastery, English and Science. With more than 750 Question Sets and 25,000 questions (growing by 3,000 per month) teachers can access high quality questions for using front of class and on pupil devices during lessons.

Funded and owned by the Bowland Charitable Trust and led by the founder of Promethean Tony Cann CBE, the team behind Learning by Questions have an established reputation for changing classrooms around the world. Further independent testing of the programme by the Institute for Effective Education confirms that pupils using Learning by Questions could advance by an additional term over a school year.

Sign up for updates from BESA
Latest news
In partnership with Brains Global, we were exceedingly proud to co-host over 100 of Africa’s most senior Higher Education delegates...
read more >
As schools’ transition to the new RSE curriculum, ClickView puts spotlight on Relationships & Sex education, with the launch of Respectful Relationships series   Recently grabbing headlines, the role...
read more >