What Schools Need to Know about Fortnite: Battle Royale

National Online Safety provides a useful guide for the whole school community for the game that is sweeping the nation.

Over the past few months, a rapidly increasing number of children are playing the game ‘Fortnite’, making its Battle Royale mode “the most played online game in the world.” As with all online gaming, there are a number of risks that need to be considered in order to ensure children and young people are effectively protected. National Online Safety provides regularly updated resources for the whole school community according to the latest trends and have therefore created a guide to educate school staff and parents about Fortnite: Battle Royale. The guide explains what the game is all about and some online safety issues to consider, with the aim to protect children whilst playing the game.

‘Fortnite – Battle Royale’, is a free to play section of the game ‘Fortnite’. The game sees 100 players dropped on to an island from a ‘battle bus’ where they have to compete until one survivor remains. The last remaining player on the island wins the game. Players have to find items hidden around the island, such as weapons, to help them survive longer in the game. To make the game harder, there is an added twist called ‘the storm’, which reduces the size of the island from the start of gameplay, making the players closer together in proximity. The game is available on PC, PlayStation 4, Xbox One, Mac and iOS.

New featured items are released daily and are only available to purchase within 24 hours of their release. These are cosmetic items, called ‘skins’, ‘gliders’ and ‘emotes’, which change the look of the characters but do not improve the gameplay. Once purchased, the player has full use of these in the future. The designs are made admirable for players to purchase and even celebrities are endorsing them. Also available to purchase in the game is a ‘Battle Pass’. When a new ‘Battle Pass’ is released, users can play a series of challenges to receive more rewards (cosmetics) by progressing through different tiers. Whatever rewards they achieve can then be used in the game.

It can be addictive

Games can last around 20 minutes but this varies with each game. Children may feel angry if they lose the game and continue to play until they achieve the result they want. The competitive nature of the game may make it difficult for children to stop playing halfway through as it could affect their position in the game.

It can be played on the go

The game was released on mobile in April 2018 meaning it can be played without a games console at home. Some schools have reported that the game is distracting their students whilst in the classroom. As the game is available outside of the home, parents may not be aware of how long their child is on the game.

News site Forbes said it had seen “dozens” of reports online by people who said their accounts had been compromised by hackers. Hackers gained access to users accounts in the game and spent hundreds of pounds in fraudulent charges.

Talking to strangers during squad mode

Interacting with other players in the game is part of the fun as players can communicate with their friends and other players in the game. Players will benefit from wearing headphones in the game to hear footsteps from other players trying to compromise their game. Wearing headphones makes it difficult for parents to hear what exactly is being said and children may be exposed to inappropriate language. Fortnite includes really good reporting features for players either cheating or misbehaving and work towards having one of the best online gaming communities.

The game IS free to play. However, if playing on Xbox, you will need an Xbox gold subscription to play the game which is chargeable.

No proof of age required

Signing up to the game is relatively simple. Users have the option to log in with their Facebook or Google accounts or their email address. When signing up with an email address, there is no proof of age required. If your child is under the age of 12, it is important to check if your child has the game downloaded.

There are many accounts on Facebook and Twitter which claim to give away free money (known as ‘V bucks’) for games which will be transferred to their Xbox Live or PSN cards. Any giveaway promotion from Fortnite will be in game. It is important to check the authenticity of these accounts before giving away personal information in order to claim ‘v bucks’. The websites or accounts may ask you to share your account name and password in order to claim the money; if these offers seem too good to be true, they usually are.

PEGI has given the game a rating of 12+. Even though the game includes violence and weapons such as crossbows, grenade launchers, rifles, pistols, shotguns and more, PEGI say “more graphic and realistic looking violence towards fantasy characters is allowed. Any violence towards human characters must look unrealistic unless it consists of only minor or trivial injury such as a slap”, making the game ‘suitable’ for children aged 12 and over. 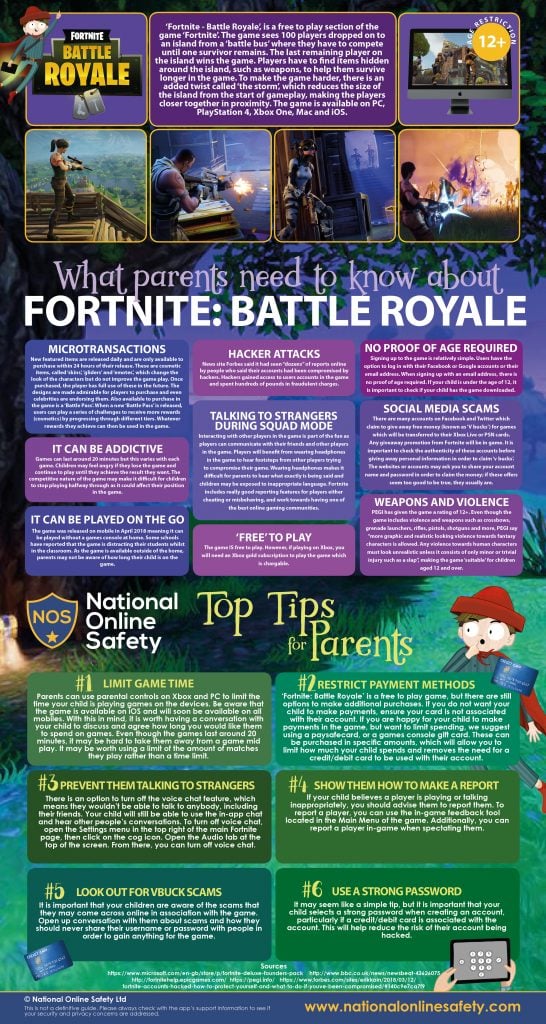 Parents can use parental controls on Xbox and PC to limit the time your child is playing games on the devices. Be aware that the game is available on iOS and will soon be available on all mobiles. With this in mind, it is worth parents having a conversation with their child to discuss and agree how long you would like them to spend on games. Even though the games last around 20 minutes, it may be hard to take them away from a game mid-play. It may be worth using a limit of the amount of matches they play rather than a time limit.

Fortnite: Battle Royale is a free to play game, but there are still options to make additional purchases. If a parent does not want their child to make payments, ensure that a card is not associated with the child’s account. If a parent is happy for their child to make payments in the game, but want to limit spending, we suggest using a paysafecard, or a games console gift card. These can be purchased in specific amounts, which will limit how much a child spends and removes the need for a credit/debit card to be used with their account.

Show children how to make a report

If a child believes a player is playing or talking inappropriately, you should advise them to report them. To report a player, you can use the in-game feedback tool located in the Main Menu of the game. Additionally, a player can be reported in-game when spectating them.

Prevent them from talking to strangers

There is an option to turn off the voice chat feature, which means the child wouldn’t be able to talk to anybody, including their friends. They will still be able to use the in-app chat and hear other people’s conversations. To turn off voice chat, open the Settings menu in the top right of the main Fortnite page, then click on the cog icon. Open the Audio tab at the top of the screen. From there, you can turn off voice chat.

Look out for Vbuck scams

It is important that children are aware of the scams that they may come across online in association with the game. Open up a conversation with them about scams and how they should never share their username or password with people in order to gain anything for the game.

It may seem like a simple tip, but it is important that a child selects a strong password when creating an account, particularly if a credit/debit card is associated with the account. This will help reduce the risk of their account being hacked.

For more information or images, contact Kirsty Smith in the National Online Safety press office on 01724 231139 or email kirsty@nationalonlinesafety.com

National Online Safety provide accredited online safety training courses and comprehensive auditing and certification packages to UK primary & secondary schools and colleges to ensure that all teaching staff fully understand the issues around online safety, are able to safeguard pupils accordingly and can provide evidence of their policies for Ofsted inspection.

Sign up for updates from BESA
Latest news
Get up to £100,000 of funding to bring your assessment design ideas to life. NCFE needs your help to shape...
read more >
As a new cohort of students embark upon their GCSE journey and others begin to think about their mocks, Tassomai...
read more >