March 13, 2018
< Back to News
Article by
Promethean
View by Date March
Back to previous page

Global education technology provider Promethean has announced the launch of the Promethean Grant 2018 on Monday 19th March 2018. Following the phenomenal success of the initiative in 2017, the company has identified a real demand in the education sector for a second Promethean Grant this year.

Promethean has recognised that schools are increasingly faced with budgetary pressures and believes this should not prevent them from having access to the latest teaching technology. The Promethean Grant aims to give schools UK-wide an opportunity to win the latest edtech in a creative competition. 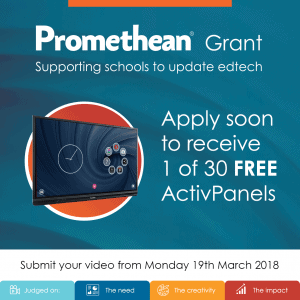 In 2017, the first ever Promethean Grant attracted exciting entries from over 250 schools up and down the country. The initiative was an overwhelming success, inspiring schools nationwide to get creative in the spirit of technology. All Saints HwB in Preston was one of 30 schools chosen by judges to win an ActivPanel.

Mr Rory Dixon, Year 3 Teacher and Computing Lead at All Saints HwB, said: “The Promethean Grant was an opportunity we just couldn’t miss out on. As soon as I told the children about the competition they came up with so many ideas and were very enthusiastic. In our class we’re really passionate about using technology for learning, so when I broke the news we had won, the children were in complete disbelief, we were thrilled, we even had a party.

“From a teacher perspective the ActivPanel is a great addition to the classroom, the connectivity means we can mirror and interact with all of our class devices.  It’s extremely beneficial to be able to get such instant feedback from the whole class. The grant is a fantastically generous initiative and we’d like to say a massive thank you to Promethean.”

In the 2017 Promethean Grant, Tottington Primary school’s entry attracted global interest, so much so that a video of Mr Simon Hunt’s innovative ways of teaching through technology was shared on Facebook by BrightVibes – a platform that shares inspiring and positive stories – attracting over 160,000 views.

Simon has been invited to sit on the judging panel for this year’s competition. “As you will see from our entry last year, we had so much fun creating our video and getting everyone involved. I’m thrilled to be a judge this year and will be looking for schools to get even more creative with their video entries and make them stand out. Show us how you embrace technology at your school and tell us how an ActivPanel could transform your lessons. Promethean have put some great tips and guidance up on their website for everyone to have a look at,” said Simon.

Schools are invited to submit video entries explaining why they would benefit from winning an ActivPanel – the latest interactive front of class display. Entries will be judged on three criteria: creativity, need, and the impact the technology will have if they are successful. 30 winners will be selected to receive a fully installed ActivPanel package valued at around £3,000.

The need to run the Promethean Grant for a second year is underpinned by Promethean’s ‘State of Technology in Education Report 2017/18’ which has highlighted fears over school budget pressures in 2018. The report surveyed over 1,500 educators and found that 72 percent believed budgetary pressures would most impact student education this year. The statistic echoed an agreement by 100 percent of educators surveyed that lack of funds was the biggest reason for unsatisfactory technology in schools.

Alistair Hayward, Promethean’s Head of UKI and ANZ markets, commented: “Schools are under increasing financial pressures, yet at the same time, are expected to create state-of-the-art learning environments to improve attainment. As a company we are incredibly passionate about education and believe all schools should be able to access technologies that are proven to enhance teaching and learning experiences, which is why we are pleased to be running the Promethean Grant for a second year.”

As a front of class display, the ActivPanel acts as a collaborative learning centre, and can connect with other devices in the classroom such as laptops and tablets; enabling students to complete tasks from the screen on a handheld device, or even gather in small groups at the front of the classroom using the multi-touch functionality.

A maximum of one ActivPanel can be won per school, but multiple entries are welcomed. The competition will open on Monday 19th March and will close on Friday 15th June. The video entries will be judged by a panel of education experts which alongside Promethean Grant 2017 teaching sensation, Mr Simon Hunt from Tottington Primary School, includes Editor of Education Technology Magazine, Charley Rodgers and Ty Golding, South Wales Headteacher and ambassador for using technology to enhance 21st century education. An article on Promethean’s Education Blog ResourcEd provides details on how to apply.

Sign up for updates from BESA
Latest news
In partnership with Brains Global, we were exceedingly proud to co-host over 100 of Africa’s most senior Higher Education delegates...
read more >
As schools’ transition to the new RSE curriculum, ClickView puts spotlight on Relationships & Sex education, with the launch of Respectful Relationships series   Recently grabbing headlines, the role...
read more >